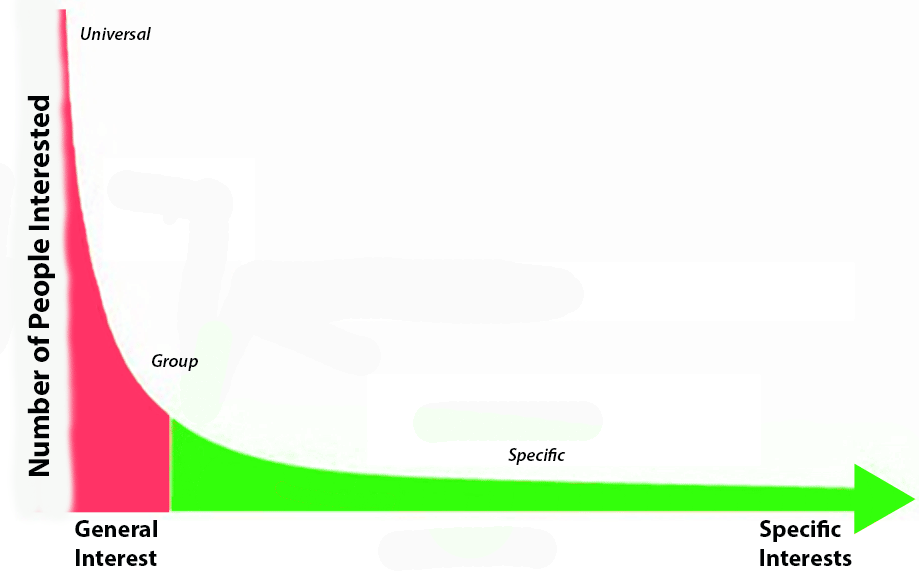 Inherently limited to physically producing impression of a press plate, the analog press must produce identical copies of that plate rather than customize each copy to each reader’s own individual needs, interests, and tastes. Similarly, the analog broadcast transmitter, even those whose antenna signal is amplified in range and reach by cable circuits or satellite telecommunication, is inherently limited by the laws of physics to transmitting the same signal simultaneously to all listeners or viewers. Humanity has used these analog media technologies for so long that many people who work in those industries tend to believe that most humans prefer to read, hear, and view the same things that other humans do. I frequently encounter this believe among, not surprisingly, producers of general-interest Mass Media: news broadcasts, news magazines, and almost all daily newspapers.

While a portion of people might want to be told what to think, to eat, to wear, to do, and might be malleable to suggestion and propaganda, even they are individuals with incredibly myriad interests and tastes. Were, for hypothetical example, all fashion magazines to agree and promote that only one style of dress is acceptable, a malleable portion of the population might don that style. However, the majority of the population likely wouldn’t, unless forced to do so by an authoritarian government. The reason why people who are given choice don’t dress uniformly is that we all inherently are not a common printing plate or analog signal, but each a unique individual mix of needs, interests, and tastes. When the choices people are given switches from few to many, from scarcity to surplus, then products and services designed for commonality decline in usage and in popularity. This is as true for media as for any other services or products.

In reality, there are remarkably few topics of permanent universal or common interest, so few that all can perhaps be counted on the fingers of one hand. (The number also likely will vary by town, region, country, and language. For instances, the 5.5 million citizens of Lithuania likely share a larger number of common interests than would the 5.5 million citizens of the comparatively more multi–ethnic American state of Missouri.) I’ve an exercise, which I’ll describe later, that I use in new media seminar to define how few are topics of universal or truly common interest.

In contrast to universal or truly common interests, group interests are numerous but diverse. Many, sometimes very many, Individuals might share a topic of interests each other. For examples, there are very groups of individuals who are fans of the New York Yankees baseball team or the Manchester United football teams or of science fiction or of Italian cooking. But sharing a group interest doesn’t necessarily correlate to having all interests in common. (It might superficially seem reasonable to hypothesize that New York Yankees’ fans who sit in stadiums and eat hotdogs while watching that team must also share an interest in sitting in stadiums and therefore will share an interest in watching the Toronto Blue Jays in a stadium or eating hotdogs for dinner at home, but those syllogistic hypotheses are easily proved off-base.) An individual might share with many people an interest in a group topic, but probably won’t share many, if any, interests in other group topics with those people. Most individuals have many group interests, but highly unlikely is the probabilities that any other person sharing one of those groups interests will share all of his own group interests with that individual.

Moreover, as the topic of a group interest becomes more specific, the numbers of people who do share that group interest declines. Plus, by definition, there will be always be more specific than general topics. The mathematical relationship of group size to the specificity of the topic follows a power curve (see graphic above). Chris Anderson’s book The Long Tail ably describes this effect. Anderson and others have noted that although a large number of people have interest in the universal or truly common topics and a relatively small number of people have interest in the specific topics, the aggregate number of people who have interest in specific topics (the area market by green in the graphic above) is greater than the aggregate number of people interested in universal or truly common topics (market by red in the graphic above). This is because an individual might have dozens, if not hundreds, of remarkably specifically interests (for instances, the songs of Glenn Campbell, bonsai plants, Zumba, the actor Adrian Brody, a town in which the individuals once vacationed, Thai cuisine, etc.), some of which might be interests about which the individual might not be acquainted with any other other person who shares that interest.

It is the unique mix a remarkably few topics of universal interest, some topics of group interest, and a great many topics of specific interests that make each and each one of us individual.

This has a major effect on the media environment and the media industries. The effect is indeed a ‘power curve’ in many meanings. Now that people have choices and access to satisfy their myriad specific interests, each individual person will do so according to his unique mix of few universal, many group, and very many specific interests.

But that era, like the Industrial Era itself, is ending in many industrial countries and has ended in the post-industrial countries such as Australia, Canada, France, Germany, UK, and the US. The new technologies of the Information Era can satisfy each person’s universal interest plus all of his group interests (with no edition page space constraints or transmission broadcast schedule constraints) plus all their specific interests. Those Informational Era media products and services are superseding Mass Media products and services, whose limitations of the analog press or analog transmitter still exist in their original forms or when their contents are transplanted online. Mass Media’s power, profits and predominance wanes as Information Era Individuated Media takes over.