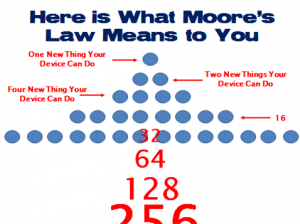 The more transistors a standard-sized computer chip contains, the more computation power it has, the more calculations it can make, and the more problems it can solve. Physicist Gordon Moore, co-founder of the Intel Corporation, observed that the sheer numbers of transistors which manufacturers were able to miniaturize and place on a standard chip had been doubling approximately every 18 to 24 months. The practical effects of what he observed were that the new chips had twice the power of the old after that time or that the old chip’s price halved (in actually, it’s not purely an either-or but can as easily be a blending of those two effects). He published this observation, which has subsequently become known as Moore’s Law.

His observation proved prescient. He first made it in 1965, and Moore’s Law has held true for more than 50 years. Although a state-of-the-art computer chip in 1965 contained hundreds of transistors, such a chip today contains several billion.

Will this accelerating pace of computer power continue forever? The practicality of Industrial Era experience says no, but the theory of Informational Era science indicates possibly yes. The Industrial Era wanes while the Informational Era dawns. During this past twenty ten years, the accelerating advance of what Moore observed has been thought to approaching some theoretical limitations of physics: namely that a transistor cannot be manufactured smaller than a molecule. Nevertheless, most computer scientists believe that Moore’s Law will continue apace at least through the remainder of this decade. And many believe that if quantum computing, which doesn’t utilize transistors and operates at the subatomic level, proves practical, Moore Law will profoundly accelerate rather than slow or stop.

Besides breaking the molecular size barrier for the equivalent of a transistor, quantum computing imparts the extraordinary and somewhat mind-boggling realm of quantum science effects. For example, a quantum computer doesn’t sequentially try every combination to break a code, as an analog or digital computer would; a quantum computer at the same instant instead simultaneously applies every possible combination as if time didn’t exist! If acceleration is a calculation of how much faster something applies itself through time, then imagine how fast acceleration would be if all time were instantaneous. Quantum computer promises awe-inspiring breakthroughs in computing. Nevertheless, the state of quantum computers today is largely akin to the level that analog computers were at during the early 1940’s. Worse, quantum computers are hugely difficult to manufacture and operate, sensitive to the slightest outside electromagnetic interference and radiation. However, the first commercially-available rudimentary quantum computer has been developed by a Canadian firm with a U.S. defense contractor as its initial customer[2] and Google as its second customer

Woe to any media industry or media company that doesn’t quickly adapt before the pace of changes overwhelms it. For many, if not most, media companies and industries in post-industrial nations, it’s already too late. American daily newspaper publishers frequently ask me, “When is all this change going to stop?” Although I’m tempted to tell them, ‘Next Tuesday,’ the real answer is that, barring catastrophic war or economic collapse, the changes aren’t going to stop.

You need look back only to the history of the personal computer to see how the accelerating pace of Moore’s Law constantly doubles disruptive effects. Although I’ll generalize a bit in the following descriptions, I won’t be far off the historical mark:

And so the doubling of power, so the geometric progression of new applications and capabilities of personal computers were engendered. The total number of traditional industries, traditional devices, and traditional practices disrupted continued to climb geometrically:

Moreover, as more and more other devices, conveyances, constructions, and contraptions – such as phone, televisions, automobiles, refrigerators and other kitchen appliances, lighting fixtures, mirrors, and walls, etc. – have or are becoming equipped with computer chips, the capabilities and applications that have already become established in personal computers are transplanted into those. This is why the relatively new categories of devices known as ‘smartphones’ and tablet computers already have more than half a million applications within only a few tens of months after those devices own inventions.

Another effect of the advance of Moore’s Law is that it increasingly makes software and hardware easier to use. A person no longer needs a computer science or information technology degree to operate a website, blog, or online store, as would have been the cases a 15 years or more ago. Complex software is required to for easy-to-use interfaces (such as touchscreens or voice recognition) to operate, and that requires powerful computer chips so that the complex software can process information quickly. The further Moore’s Law advances, the easier it is for people to use computerized devices, or for those interaction to seem nearly ‘magical’ to people.