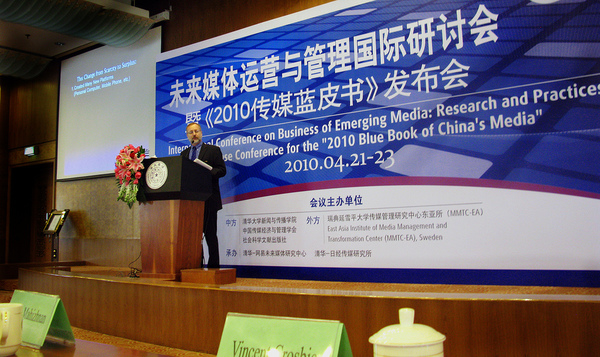 The most advanced New Media in the world aren’t in the United States but in either of two East Asian countries. South Korea is frequently called ‘the most wired’ nation in the world: virtually all of its 51 million people are online or, as the home to Samsung, the world’s largest manufacturer of smartphone, interconnected wirelessly. Across the Yellow Sea from , South Korean, however, lay the world’s largest population of Internet and smartphone users, who have the world’s most unique and hyperactive New Media market. I believe that it will be from China that most of the world’s New Media innovations during the 2020s will arise. The formidable uniqueness of the Chinese language itself, have caused many technologies, particularly those involving smartphones, to evolve rapidly and hyper-competitively during this past decade. I think that many of those Chinese media technologies will soon start percolating through those governmental and linguistic ‘firewalls’ and begin to be adopted (or ‘Westernized’) worldwide during the 2020s, becoming platforms upon which many of the next wave of technologies for media will be founded. It is time that Westerners learn more about these. [click the headline to read more]