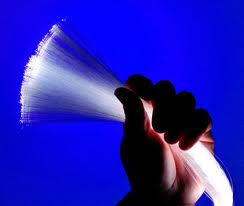 We don’t live in a ‘wired’ world, but a ‘fibered’ world. Wired communications is obsolete. Metallic wires could never have sustained the phenomenal growth of the Internet or of the global telecommunications network in general. The world’s capacity to use telephones and networked computers would have reached a ceiling or collapsed more than a dozen years ago if not for two telecommunications inventions of the 1960’s ad 1970’s: lasers and fiber optics. The constant acceleration of those combined technologies makes the speed of Moore’s Law look like a snail’s pace.

Copper fibers had been used as the sole means of electronic communications from 1837 until 1880 and as the primary means of interpersonal telecommunications until the 1990’s. Copper fibers are still how most of the world’s wired telephones inside homes and offices get their signals from telephone poles or underground junction boxes outside. But simply an electrical signal through a copper wire, be that signal the on-off binary of Morse Code telegraphy or amplitude sine wave of a voice telephone call, has a physical speed limit which was first hit during the late 1870’s, a speed limit of approximately 30-kilobytes (0.03 megabytes) per second. Although that’s far faster than anyone could use a telegraph key, during the early age of telegraphy it meant that only one telegraph could be sent at a time through any single copper wire, a burden to any commercial telegraph system linking together major cities or countries. Even today, it means that a copper wire phone line is incapable of delivering stereophonic sounds (which requires more than 30-kilobytes of information per second).

During the 1880s, an English telegrapher and self-taught electrical engineer, Oliver Heaviside, found that by first converting signals into a radio wave, rather than a simple electrical pulse, multiple signals could be sent simultaneously down a copper fiber if each signals was sent at a different radio frequency and if the copper fiber carrying the signals was itself sheathed within a tube of copper mesh that blocked outside radio signals. His invention was the coaxial cable, which he patented. When wireless radio was invented by Guglielmo Marconi and by Nikola Tesla each independently during the following decade, the radio industry utilized copper coaxial cables to deliver their radio signals from transmission studios to transmitter towers, as did the television industry in later decades. However, there was still an intrinsic transmission speed limit to copper wire used with radio or television signals: a few gigabytes per second aggregate total for all the signals carried. Moreover, those wired signals needed to be amplified at least every 20 kilometers or so. By the 1960’s, the telephone, radio, television, and other industries were looking for a faster alternative to keep pace with the growth of telecommunications.

Light operates as much faster frequencies than do television or radio signals (150-terabytes compared to 1-gigabytes or 3-megabytes per second respectively). Thanks to Albert Einstein’s explanation in 1905 of the Photoelectric Effect, physicists had by the early 1960’s had developed first microwave and then laser signaling and receiving devices that could communicate across long distance outdoors. During the 1970’s, they’d miniaturized these photo-electronic devices (see Moore’s Law) enough to be able to send their laser signals through fibers of glass, a science now called photonics but colloquially known as fiber optics.

The transmission capacity limit of photonics is yet unknown. For example, physicists recently demonstrated a photonic system capable of delivering the contents of 700 DVD discs in a single second – nearly 3 terabytes or 3 million megabytes per second – an unlimited distance over a fiber optic cable thinner than a human hair. These superb capacities have led telecommunications companies worldwide to begin replacing their copper wire fiber networks with fiber optic ones. In all but very rural areas of developed countries, that work has been completed to the point at which the only remaining copper fiber or coaxial cables left are those remaining inside homes or offices themselves.

The phenomenal capacities of photonics and how increasingly faster signals can be transmitted through fiber optics led Gerald Butters, the scientist who formerly headed Lucent’s Optical Networking Group at Bell Labs, to see if he could make an observation similar to Moore’s Law for its advance. Like Cooper, he looked back at the transmission speeds of early photonics and forward to the present. He found that the speed at which information can be communicated through fiber optic circuits has been doubling every nine months, an observation that since become known as Butters’ Law.

Most people who live in developed countries where photonics are in widespread usage by telecommunications industry won’t see the transmission speeds provided by their Internet Service Provider companies double every nine months or certainly accelerate into the terabytes per second range in the immediate years. Those companies aren’t able to install and amortize the newest photonic technologies through their networks as quickly as Butters’ Law is accelerating, and most of the increased transmission capacity those companies for which those companies have been able to avail themselves has been used keeping pace with the increasing numbers of cable TV channels, of on-demand video deliveries, and of long-distance conveyance of mobile telephony. Nevertheless, most home and office users of wired Internet access (and mobile Internet access, too) have seen steady increases in transmission speeds and capacities. At the beginning of this decade, home Internet speeds of, at most, 1- to 3-megabyte were the norm, but now 5- to 50-megabytes per second are common. The European Commission has proposed that all new households in the 27-nation European Union be wired for 100-megabyte per second Internet access by 2020 (the initial minimum proposed is 30-megabyte per second).

The ramifications of Butters’ Law are mind-boggling and will have tremendous effects on 20th Century media industries such as telephony, broadcasting, and cinema, as well as on 21st Century media developments such as holography projections, augmented or virtual reality, and whatever other new forms of communications come next.

One of the practical effects of Butters’ Law is that probably by the end of this decade the time it takes to download or upload a song, a photograph, or a high‑definition movie via a modem connected to fiber optics won’t be perceptible. People now old enough to remember dial-up modems might think that to be incredible but by 2020, at the current pace of Butters’ law, all the textual information currently in the U.S. Library of Congress could be downloaded within a minute or the entire inventory of a Hollywood movie studio (nonetheless a single movie) within five minutes. The next generation won’t know the meaning of the phrase, ‘waiting to download’.

Next webpage: When Moore’s, Cooper’s, and Butters’ Laws Interact on Media